Like Psoriasis, medical researchers are not sure what causes vitiligo. Some researchers think the body may develop an allergy to its pigment cells, others think that the cells may destroy themselves during the process of pigment production. Research on the cause is continuing.

Vitiligo may spread to other areas but there is no way of predicting whether or where it will spread.

Can Vitiligo be treated

The symptoms of Vitiligo can be treated. And the most common combination of a drug called Psoralen (Applied to the skin or taken orally) and regulated doses of sun light. Some clinics give Psoralen and Indoor Ultra Violate light treatments. Dermatologists in India give melanocyl tablets. Please note that medicines given to Vitiligo patients are the same that are given to Psoriaasis Patients.

Vilitigo is absolutely not a contagious disease.

Is it the beginning of Cancer

Vitiligo is not either a cancerous or pre cancerous condition. People with skin cancer sometimes develop Vitiligo in many of the cases. Vitiligo seems to stop the cancer from spreading.

It has been proved beyond any doubt that, Psoriasis and Vitiligop occures due to the premature death of epidermis cells and melanocytes cells respectively. During the past 5 years of my practice along with Dr K P Sree Kumari Amma MD (AY), while seeing the excellent result of Psoriasis patients, some of the patients affected with Vitiligo approached me and requested to prepare the same Herbal Oil for them. On Application, some of the patients got good results within six months, and this was the case even to a lady who has been affected with Vitiligo on her face, hands, and legs for the past 18 years having not taken any Medicine since three years. 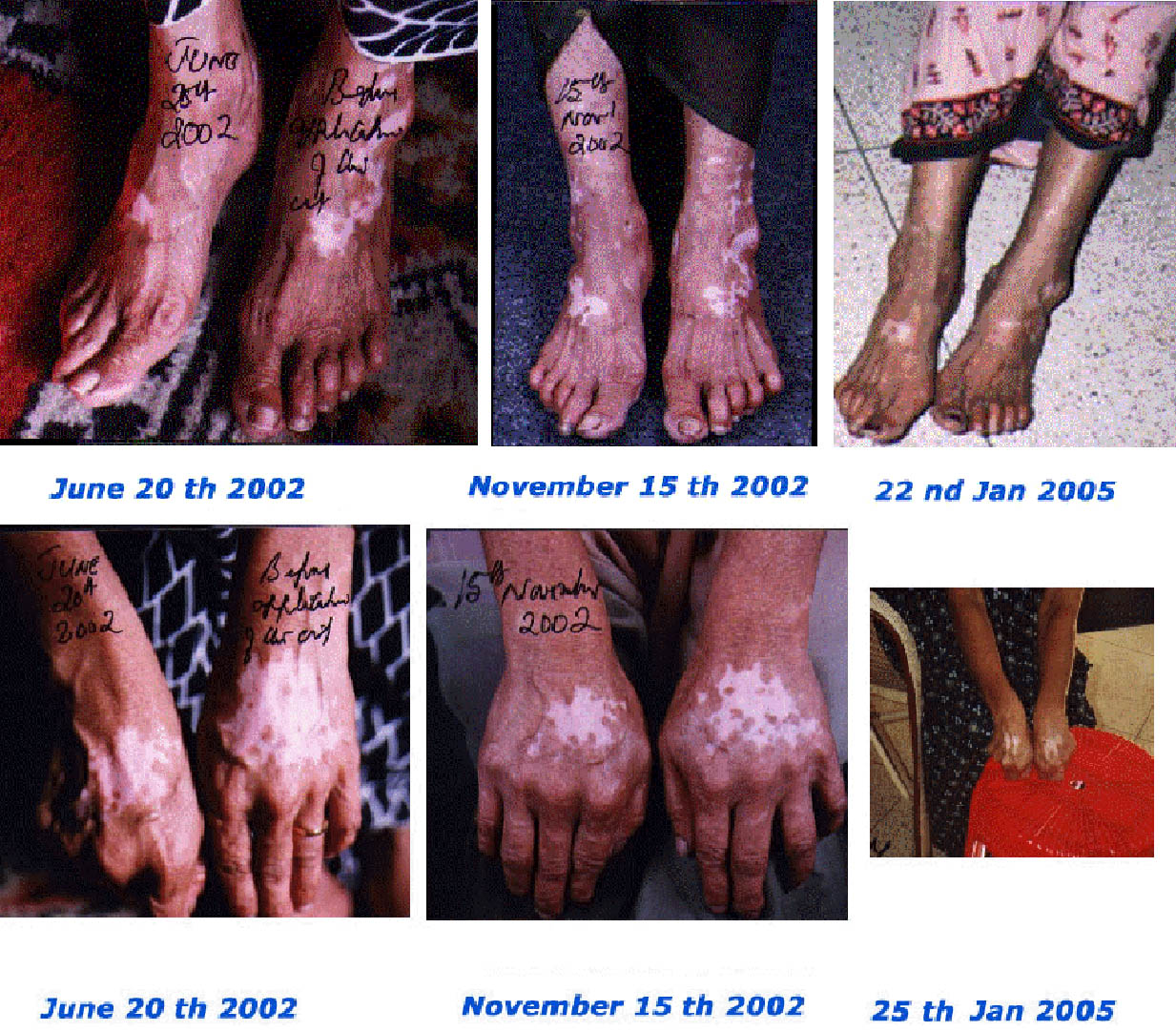 Based on my experience I presume that the herbal oil which is made of natural products which is arresting the premature death of Epidermis cells as in the case of Psoriasis, is equally capable of arresting the premature death of melanocytes cells of those patients affected with vitiligo. Hence this unique herbal oil meant for external application only and having no side effects is a great blessing to Vitiligo patients. Result will be quick, if the patients starts applying this oil immediately on diagnosis. In case patients develop Vitiligo symptoms after recovery he will get relief again after applying this oil since this oil does not develop immunity.

Patients should apply oil at least for a period of two years and initial result can be expected only from the fifth month onwards. Curing depends upon the constitution of the body of the individual concerned and the duration of illness. In case the patient do not find any change even after six months of application, he can discontinue as he falls under the 30% category. Patients suffering from vitiligo should apply this oil continuously for two years and they should not take any medicine internally or externally for the treatment of vitiligo except medicines meant for other diseases if any. If the patient gets a relapse, they have to start using this oil again which do not develop any immunity.

Patients should take only vegetarian food that suites their body. Do not take curd, citrus fruits or food items made of excess tamarind. Tea, coffee, milk and butter milk can be consumed.